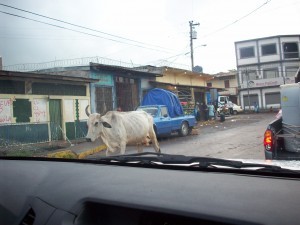 For this job we were based in the town of Rio Blanco of Matagalpa, or basically the furthest town east of Managua that is still on the pavement (even though our project was about 60 km further east … this was the closest town to base out of).

The town is about a three to four hour drive east of Managua (about 220 km) over a sub par highway, secondary roads and a few dirt road sections (with a lot of rough sections and construction). The roadway meanders through some small towns along with a 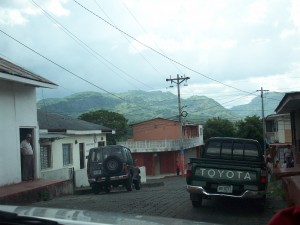 wonderfully scenic mountainous background that helps make up for the long journey. Along the route we pass many bus loads of people, trucks topped with supplies (with and without people on the back), other vehicles, as well as various horse and cattle spread out along the side of the road.

Rio Blanco (Spanish for “White River” that may have got its name for the river of the same name that pours down from Cerro Musún – yet another extinct volcano) is apparently renowned for its simplicity and its surrounding natural treasures, witch one can easily appreciate, it is a rather busy little place that boasts a population of around 30 000. Just like most places in Nicaragua, poverty is clearly abundant here. The climate here is very humid and tropical, with heavy rains almost every day (or night) because it is what they call the Rainy Season here. It will be hot and sunny one moment, then maybe get a rain shower for an hour or so and then it can easily be back to sunny again.

The hotels in Rio Blanco are inexpensive but also not very glitzy, the one we are staying is the 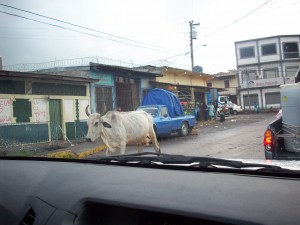 best in town I believe and it does have running water (no hot water though) and electricity too witch I am told not all hotels here actually do.

On the plus side it is much more of a town then the people in Managua seem to have given it credit, and although it certainly is a little bit different then most towns I have stayed in, it is not all bad. Perhaps a little rough around the edges but it seems to have all the necessary basics that we need to operate with. Gas stations, restaurants, little stores, a place to land and secure our helicopter etc. Rio Blanco is not in any travel guide so probably does not get many tourists, the people are pretty friendly but not used to dealing with outsiders from Canada (I think just bible pushers mostly) very much so we do get a lot of attention .

We have been living on local dishes such as gallo pinto (a mixture of rice and beans), grilled beef (carne) or chicken (pollo) a small salad, cheese (cuajada) and fried plantains. Almost every restaurant here has the same menu so it doesn’t really matter where you go to eat. And there are three main beers (Toña, Victoria & Premium) witch turns out is almost cheaper then water and pretty common everywhere, I would even have to say that the locals drink more beer here then back home. A cold beer in a bar can go for about $1 to $2.

It is also funny to see cattle walk through the down town like every thing is normal, especially this one particular white cow that I have saw in town early in the morning at least 3 or 4 times. 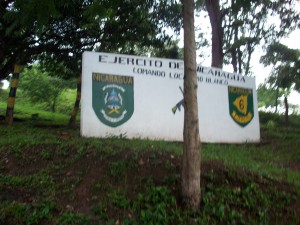 Here is a video collage of photos from Rio Blanco (note: not by me), Nicaragua that I found on Youtube (has some Spanish music playing along with it, could be better with the volume turned down)