Currently doing a few small LIDAR jobs in the Sioux Lookout area. Sioux Lookout is a town in northern Ontario (about a 4 and half hour drive north west from Thunder Bay) situated on Pelican Lake, part of the Lac Seul hydro system. It claims to have a population of 5200 and also known locally as the “Hub of the North” (although I see that phrase in other northern towns as well). 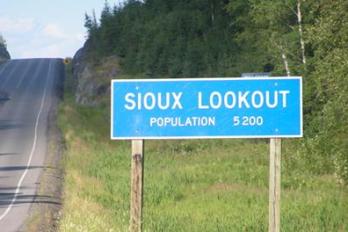 I can imagine that many people come and stop here as a last stop before going camping, fishing or hunting, judging by the number of trucks, boats, all terrain vehicles and float planes. It is basically the last real small town that you see before you head into the bush so I imagine they make a lot of money from people stocking up or coming out to replenish their supplies.

It does have an extensive water system fed by the English River into what may appear as an infinite amount of lakes, ponds, streams and rivers. Lots of wildlife too, on my travels here I have saw several black bears, coyotes, deer, moose, eagles, rabbits and various types of birds (Our project areas are actually a few hours drive north of the town so sometimes I have been spending up to six hours a day traveling on dirt roads and secondary roads).

In front of one of the bar / restaurants in town is an old Seabee amphibian bush plane, somewhat odd type of lawn ornament but it seems to fit in here none the less. The town was a little different then most in Ontario as we noticed that they had several restaurants that were not open on Sundays or holidays (such as Labor Day) witch allowed Subway to benefit from.

The weather has been great while we are here so there has been no time to do much extra curricular activities, like checking out the local beach or some of the several recreational trails in and around town.

More from my Travel Blog …

Below are random links to the various places and stories that I have covered in my Travel Blog.